For our last tasting of the financial year, we took things back to some of the classic Scottish distilleries. The common theme with all our whiskies this night was that they were all double or triple wooded. 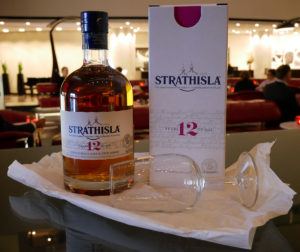 This whisky was chosen as it hails from the oldest working distillery in the north of Scotland, and is also one of the key ingredients in Chivas Regal. It has been aged in ex-bourbon casks and ex-sherry casks, though reportedly more time with the sherry.

Both to the nose and palate, this whisky was rather soft and sweet and was considered a good start to the night. There were subtle flavours of vanilla, butterscotch, and even a creamy sherry texture. It lacked a bit in the tail though and was over pretty quick. Many felt it was a whisky you could easily drink or day but would still leave you looking for a bit more complexity.

Only the first whisky of the night, it scored an average of 6.8 out of 10. 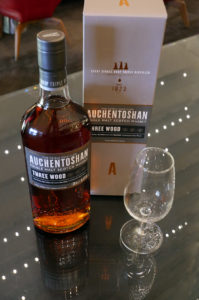 A Lowland whisky, the Auchentoshan distillery is known for triple distilling all its drams. Following on with the rule of three, this whisky has been aged in a combination of ex-bourbon, ex-oloroso sherry and ex-Pedro Ximenez sherry casks.

Immediately on the nose, you can tell this is a fuller whisky with scents of wood and fruitcake that carry over to the palate. You could taste the smooth wood flavours with a dry feel and a hint of something else we couldn’t quite put out fingers on.

An intriguing whisky, it brought in a range of scores from 5s up to some solid 8s, ending with an average of 7 out of 10. 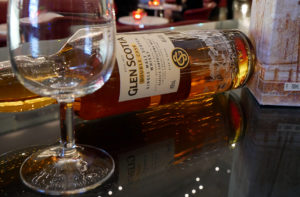 Glen Scotia is a Campbeltown distillery. The small peninsula not far from Islay used to be home to over 30distilleries and was considered the whisky capital of the world. Today there are only three left in the area; Springbank, Glengyle and Glen Scotia.

Like the Strathisla, this whisky was aged in ex-bourbon and ex-sherry casks, and as a result, it carried a similar flavour profile but came across as more complete. It had a good tail that allowed the vanilla and sherry notes to linger. It was sweeter and held more scent and flavour in general with an enjoyable spicy finish.

It scored an average of 8 out of 10 with pretty consistent individual scores. 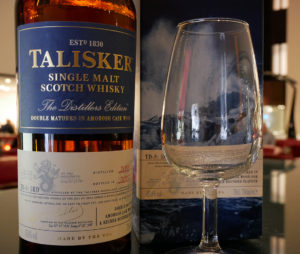 A distillery that needs little introduction, some of our members had even visited Talisker recently. The distiller’s edition is a lightly peated 10year old whisky that has been double matured in Amoroso sherry casks.

Still sporting that dryness Talisker is known for, this edition eases back on the peat, overshadowed by a slightly sweeter flavour. If you’re expecting a classic Talisker you may be let down, but the softer flavours make for a good session whisky that still carries hints of that salty edge. It’s the Talisker you can drink all night.

Tying with the Glen Scotia, it brought in an even average of 8 out of 10. 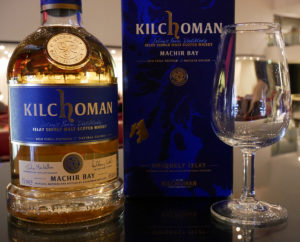 Ending at Islay, Kilchoman is the newest distillery in an incredibly old region. They started in 2005 on an island where the next youngest distillery opened in 1883. The Machir Bay is aged in ex-bourbon and Oslo rose sherry butts, with a combination of 3, 4 and 5-year-old whiskies.

The first thing anyone noticed is that this is very peaty in a good way, with a good finish to carry it over the line. You could pick up lemon scents, a hint of cut grass, and some sweetness, all with a mid-palate bite. It brought together a good nose, strong body and a long tail.

There were some high scores, brought down by a few who are not big peat fans. It still won out the line up with an average of 8.2 out of 10.

This brings an end to the tastings of the 2017-2018 membership year. At our next tasting members will have the first opportunity to renew, with those on the waiting list to take up any empty spots.